I purchased this game before it came out on steam but i never received a steam key. Can i please get one?

Please make this game available on android. I promise i will buy it.

hiii software designer here who would love to help you make this for Android/iOS. lmk if you want help!

It'll be fantastic if this game comes for android.

Could you make it for android?

I agree with this question plz do

Can't this game give more Berry Bushes? I churned through a dozen packs and got 1 total!!

Question: When the game updates, will I be able to download the updated versions from this site?

Really addictive game that strikes a great balance between being chill and challenging, and is backed up by a beautiful artstyle.

Is there ever gonna be a mobile version

I would love to buy this game however I’m not seeing a native linux version. Do you think you could make one so that I could then feel comfortable paying for this game? Thank you!

It works perfectly fine with Wine / Proton. I played it on Steam. No problems at all.

Wine/Proton is not sufficient to pay for a game because there’s no guarantee of support from the developer. A native version needs to exist for this support guarantee.

And I don’t want to use Steam.

Then don't buy/support it.

That’s the plan, if the developer never makes a native linux version. I’m not sure why this needed to be said.

Just one thing, I don't really see the point in your comment. You are free to make your choices without making them public knowledge. As a very small portion of the operating system user base, any complaints we have don't matter, especially when the game itself is rated platinum on protondb.com (meaning, a flawless experience using Proton).

The point of my comment is to ask the developer to consider making a native Linux version of the game. None of you are the developer so I really don’t know why any of you are replying to me.

You got your answer, so whats with everything that came next?

I just bought your game and I am already addicted to playing it! Trying to expand my village while keeping everything under control and not die is a challenge but fun! Can't wait to play more and can't wait for the update!

I have just bought and tried launching the game, but also ran into a variant of the Mac issue.  I experienced the same behaviour with both the standalone Stacklands.app and launching using Steam.  v1dra's fix was necessary to launch the standalone app.  This is Stacklands v1.0.11 on macOS 10.14.6.

Upon launch, the Sokpop animation runs but slowly.  Right after, in the game menu the game freezes with very high CPU usage.  Because it's full screen by default, there is no way to exit, and the only way out is a hard reboot.  Unpleasant!

Such a large spike in CPU usage quickly paralyzing the computer is symptomatic of a "while(true)" loop without break or with insufficient sleep time.

I'm looking forward to hearing an update from the devs.  Please run tests on a Mac before each new version release... or stop claiming that this game is Mac compatible (many games are correctly advertised as Windows-only).

I forgot to mention that the game auto-detected my OS language and launched in French: I'm saying this in case this specific issue could have been introduced with the additional languages in v1.0.11.  That being said, based on the comments on this page it looks like users have been experiencing such issues on Mac with earlier versions of the game.

Can there be a Chrome OS or Android version? I can't really play it and I really want to! Please make a version for Android or Chrome OS users. Thanks! 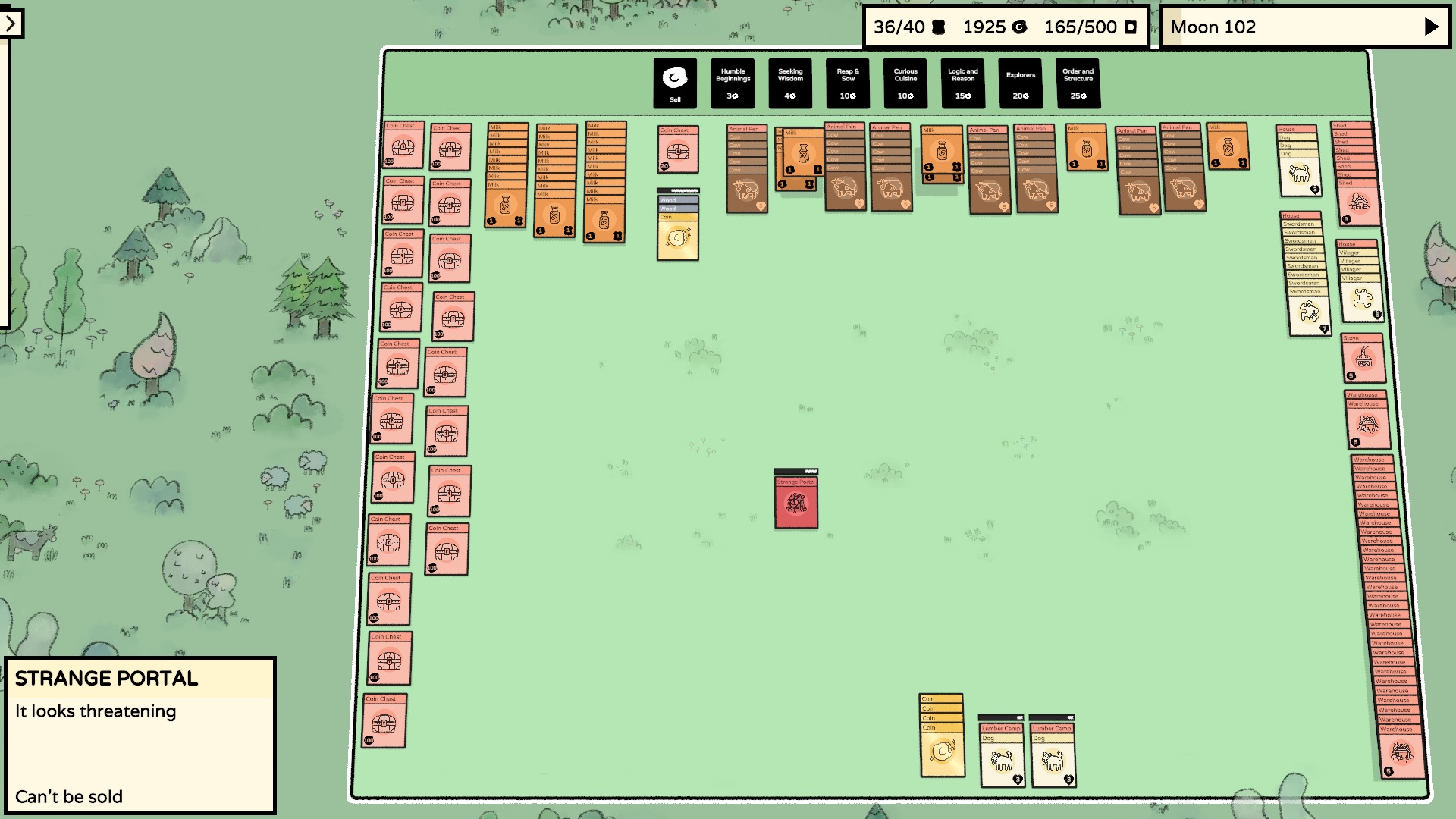 sick man, how did you get so many cows? 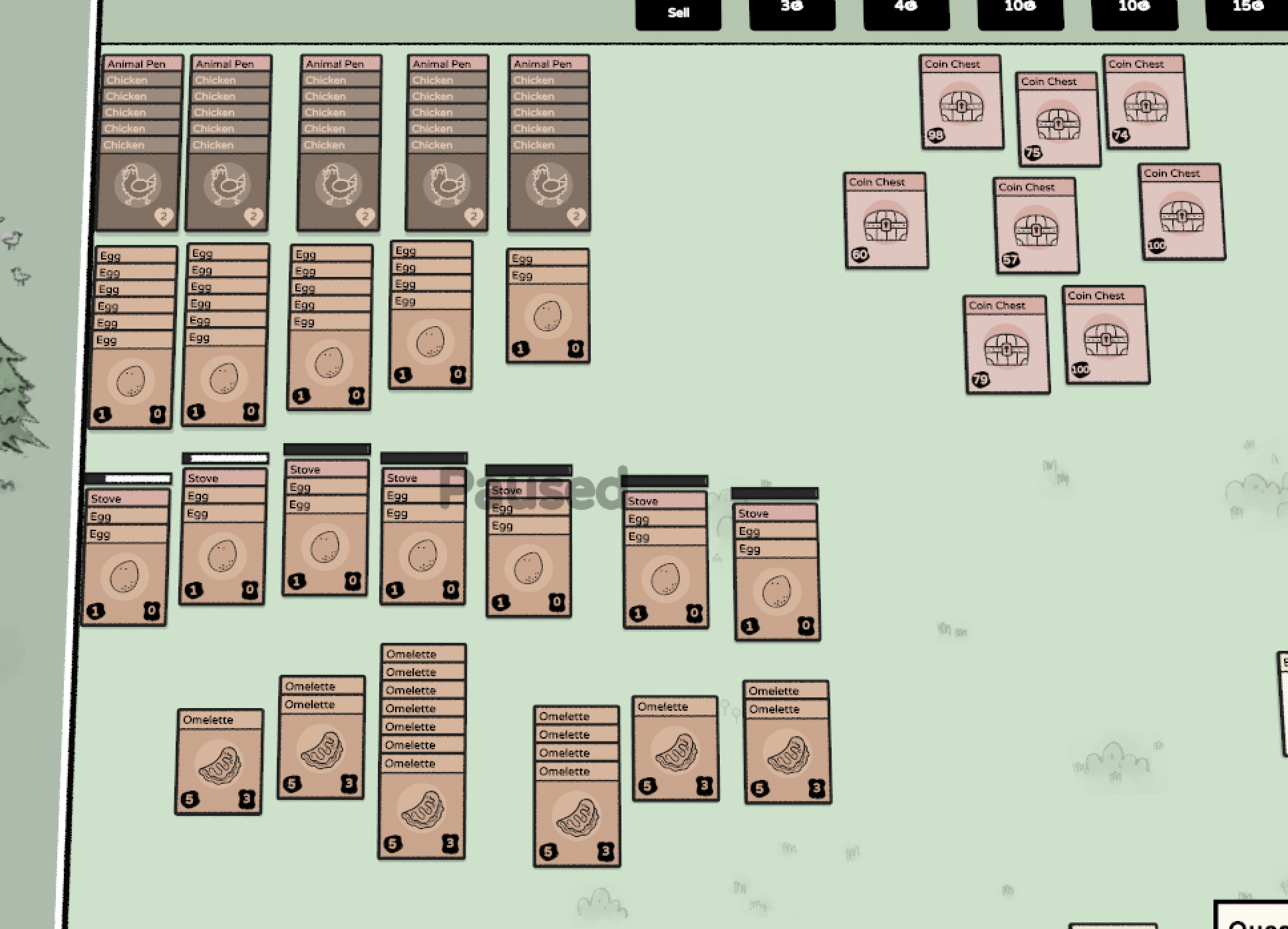 Here is the Chicken farm

Hi, I am back playing your games (:

Simmiland was so good and you did it again with Stacklands. Trying to speed run your game again and it is quite the challenge. Getting a lot of chickens was the key and making omelettes out of the eggs for food, for this process you don't need humans, so they can do other stuff. One game I played, I had two temples and spawned in two demons at the same time. I had an army of 10 so it wasn't that difficult. Some funny thing I found is that you can cell you coin chest in the market. Can't wait for a new update :)

The same with the Mac problem. Bought it for 4€ on Steam but it just shows a black screen. And since I have never used Terminal the instructions given are very confusing ':)

If someone could help please react

Hi, I have some experience with the Linux terminal, I hear its pretty much the same, so I could give you a hand if you are still in need. :)

Here is my Discord if you are interested: Johnny Joestar#7774

wow okay. so this game is fun but from a technical standpoint it's a nightmare. as other comments have mentioned, the mac build is not marked as an executable for some reason, so the whole game just doesn't work if you don't understand how to fix that. the steam version is fine, up until you run into some weird situation where suddenly the application starts using enormous amounts of CPU cycles for some reason and slowing you computer to a crawl. would be worth the $5 if it worked, right now it's literally unplayable levels of broken.

Hi, new to the Mac world. If I download the MacOs version here do I have another program then what is downloaded on Steam? That seems just one download... Does the program there 'see' the Mac and changes some settings?

And I hope someone can make a vid on how to open the terminal and type in those comments that are posted here. New Mac users are carefull to type in comments that they don't understand. Thanks and awesome game #whattagame ;-) Jake.

It keeps saying "no such file or directory"

You have to download and move Stacklands.app in the Application folder and then be in /Applications folder in terminal in order to those commands to work. If you type ls in the terminal, the Stacklands.app should be on the list, otherwise it won't work. I followed instructions from the Download page for MacOs first.

I have never worked with terminal before, could you give step to step instructions pls?

Double clicking it will unzip the contents into a folder with the same name. Inside the folder there is a Stacklands file. Drag it into the Applications folder. It should be under favourites on the left in Finder.

type cd /Applications and press enter. This command will change the folder to where you dragged the file.

type ls then press enter. This command will list the contents of the Applications folder. Stacklands.app should be on there somewhere.

type chmod +x Stacklands.app/Contents/MacOS/Stacklands and press enter. This command will allow execution of this file.

type xattr -r -d com.apple.quarantine Stacklands.app/ and press enter.
In case the MacOS won't allow you to execute the command because it was downloaded from the web, extra attributes are added to the files.
We have to remove them using xattr. Option -d will delete a specific extra attribute. -r will do that recursively for every file and folder.

And that should do it.

When I type ''chmod 775 Stacklands.app/Contents/MacOS/Stacklands''  it sais ''no such file or directory''.

If u would know how to help me further add me on my friends on dc: Nasim ACNH#1019

can you upload the ost as well? I just love it

Its an awesome new view point on city builder, very cool idea, makes me think in a possibility to create a tower defense with cards

does this work on redmi note 10? Please help me

This feels very similar in engine to cultist simulator which makes me desperately want this for andriod. I need more good offline games on mobile to kill time in transit and I feel I could get lost in this one.

Don't bother buying if you are on a Mac. Even following the odd instructions from the download page I cannot play at all.

I hope this comes out on switch soon!

Is SteamOS or Linux support planned?

There has been a lot of talk about this game everywhere, so I finally decided to buy it. But sadly the Mac version doesn't work, it won't install :(

Will there be a patch for this soon? Has anyone find a fix for it? I've seen multiple comments regarding this, so it would be a shame that we can't play it.

I posted detailed description how to do it.

Incredible game, bought it at 1pm, finished it at 4pm and have been playing ever since! Where did the time go? Well done team. Only piece of constructive feedback is that I'd prefer for the coins to be tracked but not take up space on the board, that's minor though. Well done.

i would love to have this game ported to iPad

I think it’d be very successful

I can't run the game on mac even with permission changes :(

I posted detailed description how to do it.

Very nice game, its sad how short it is.

I'd love to see you expand on the game by adding different objective paths, this will probably give the game a lot more replayability.

try Underhand (on steam or mobile), its way simpler than this game, but it had a longer playtime for me (I did beat stacklands twice, first run was 36 moons and second run was 26, got all achivements except 2) mainly because the game has a series of objectives that you need to replay the game multiple times and beat each one in its own run.
Also underhand is a bit harder, i do lose quite often, which i think increases repliability. I beat stacklands on my first run and the only time i felt danger was when monsters spawned and i didn't have well equipped villagers.

coz at the moment it's too much apm

An quality of life thing would be to not have to drag the coin chest around onto the card pack would be nice to just be able to click on them once you have bought the chest cause the pack tends to overlap the chest alot.

Windows 10 - game doesn't get past the little 'honk' noise. Just sits there with a black screen. Tried Steam and Itch versions.

If it's helpful, Luckitown loads and plays fine on the same machine. Unfortunately, Stacklands just stalls out without ever providing an error message.

I've temporarily disabled antivirus, ransomware protection, etc before installing and running, so that doesn't seem to be the problem.

I got this game for Mac.
It says "“Stacklands” is damaged and can’t be opened. You should move it to the Bin."

Not sure how to fix it.

I just got the game and have the same error even after changing the file permissions in the download page.

chmod: xattr: No such file or directory

chmod: -r: No such file or directory

chmod: -d: No such file or directory

chmod: com.apple.quarantine: No such file or directory