Blue drifter is a harsh bounty hunter game set on a miserable rainy planet. Track down criminals with your flying car, and eliminate them to ultimately buy yourself a ticket to outer space.

The ambience of this game is so cool, it reminds me of bernband, and probably allot of inspiration comes from the same place, so awesome, this game is an amazing inspiration, do not get surprised if I do something similar like this in the future, awesome little piece

Do you have any resources to show how you created this style of graphics?

I'd look into color quantization, cel shading and distance based fog.

Sokpop patreon at the $10/mo level includes full source! (for personal use)

would love to see this as a full game, the atmosphere very  much reminds me of what if I was a bounty hunter in star wars

This is great. I'd love to see more like this. Great atmosphere.

I'd love this to be a full sized game!

this was cool! once i understood the gun charging, it became fun... was just trying to use the LMB and was unsuccessful many times. it was pretty cool failing a bunch, then getting revenge by going to outerspace (O:

This game was really fun. Thanks for making it!

Just a note, that you need to hold right mouse button and click left at the same time to fire, which is not possible on a Mac laptop trackpad. I plugged in an external mouse and it worked fine.

Note to devs: If you allow an alternative to GetMouseButton() via GetKey() or GetButton() that would be helpful :)

it's nice but theres no ammo for the gun? It just says charging when pressing mouse 2. Mouse 1 does nothing. Any advice welcomed!

hold down mouse 2, while holding it down, click mouse 1

One of my favorite sokpop games so far!!

Reminds me of oldschool feel of Gametek's Quarantine.

I will wait for it on steam. Just if there is any procedual aspects to the game like locations?

Location of targets might be randomized. Not entirely sure though. Everything else seems to be static.

Can we get a linux build please?

omg, look like very tasteful! which game engine you use?

Is this one coming to Steam as well?

The aesthetic and gameplay really work well together. Would be very excited to see a more developed version of this project.

this game looks Great! i like to see relaxing games like that, Keep up the good work sokpop, we love zour games!!

Cool little proof of concept. I really liked the visuals and the environment, you clearly put some thought into it.

the game looks cool, but you need to show us more, its only 3 bucks, but we dont know what we would get for that. The patreon sub is a good idea and will get better as you get more games made, but maybe make a youtube and link it here kind of how Kaze Emanuar does for his mods.

It seems like you're trying to sell a not-even-a-demo. Well, good luck with that...

I like the simplicity of it, the art style. I seriously think this has potential to expand;  any chance you could go procedural cities?, with some buildings you could go into, i remember another game/tech demo that had that, although no shooting- more of a explore the world and escape, there were lots of NPCs walking about which helped set the immersion). Dang  i cant remember what that was called? anyone know?

You could also add some basic  CYOA text interaction with getting intel on your bounty or paying for access to closed on shortcuts etc- intel could be such as narrowing down which quadrant they are in the city sector,  sometimes they give an exact location which you see on your hud that you already got in place in the game already for more money- however sometimes these leads to ambushes.

The gameloop would be the same but more exploration and more npc presence, have a basic map with zones on them- which clues of bounty are made from paying for intel or the bounty intel when you take the job says he or she will be either in Quadrant A or B etc.

I think this would be worth paying more for (and go on Steam) if you added this sort of thing and even has potential to add things to spend money on- like better weapons and stun weapons, like some bounties require target to be caught alive, which makes it more challenging.  Interiors for buildings like stairwells and hallways, elevators etc where you chase your quarry who might have some hired help.  Heck i could envision a MP mode where players have to get to the bounty first as well as some roles of being the body guard of targets and being able to mark where other NPC guards will stand and face.

You're thinking of Bernband maybe?

Yes that is it. I came across that again other day. I think the same guy who made that little game made this new short game? anyway i think the two could fit - with a slightly bigger world. The immersion of lots of NPCs works well.

I really wonder how you achieve this artstyle and this graphics? 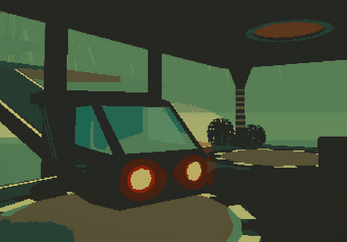 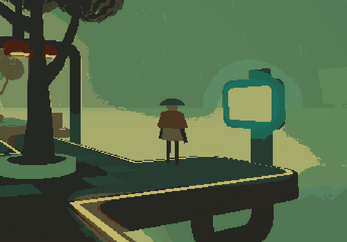 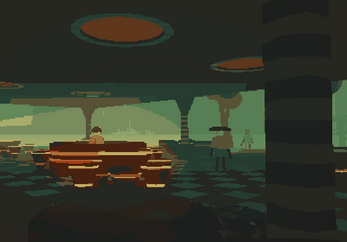